2 Chronicles 18:31
“So it was, when the captains of the chariots saw Jehoshaphat, that they said, ‘It is the king of Israel!’ Therefore they surrounded him to attack; but Jehoshaphat cried out, and the Lord helped him, and God diverted them from him.” 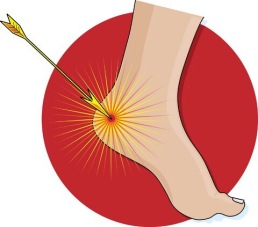 Greek mythology tells the story of the great warrior, Achilles, who survived many battles. As a baby, the legend foretold he would die young. To prevent his death, his mother took him to the River Styx, and dipped his body into the water. She held Achilles by the heel, so his heel was not washed over by the magical waters. Later in battle a poisonous arrow struck him in his heel killing him.

It seems that Jehoshaphat had an Achilles’ Heel of his own. We know him to have been a very godly man, who walked in the footsteps of the godly kings who reigned before him. We also know he was responsible for bringing spiritual reforms to Judah, and for sending teachers throughout the land to instruct the people in the ways of God. With all that, Jehoshaphat thought it was a good idea to befriend wicked king Ahab of Israel. A relationship that almost cost him his life. It wasn’t until he was surrounded by an enemy army, and face-to-face with his own death, that he realized the folly of this union and cried out to the Lord.

We need to be very careful. An ungodly relationship, or a compromise with sin, can undo years of walking with the Lord. It is not enough to wear some of the armor of God, we must wear all of it. If you have made steps toward walking with the Lord, but you are leaving one or two doors open to your old life, they will ultimately be your demise. Paul exhorted us to leave no provision for the flesh.

Perhaps it is time to reconsider some of your relationship choices. Are you being led away from the Lord by the company you are keeping? If so, make a break before you find yourself under a barrage of attacks too great to overcome.

One thought on “Achilles Hill ”