Job 26:14
“Indeed these are the mere edges of His ways, And how small a whisper we hear of Him! But the thunder of His power who can understand?”

After describing the power of God in His acts of creation, Job concludes, everything he has ever known about God is but a glimpse of what He is truly like.

Psalms 19:1 “The heavens declare the glory of God; And the firmament shows His handiwork.”

The Palmist declared, God revealed Himself to man in creation. When we take the time to look at the marvels of the universe, we learn much of the nature of God. We are reminded of His power, majesty and even His creativity. Creation, however, is much too limited, it can only give us a glimpse into the character of God.

Because of the limits of creation, God chose to reveal Himself through His written Word. The more time we invest in getting to know our Bible, the more we will learn of the ways of God. Page after page reveals who He is and how He acts. However, even the Word is limited. The apostle John declared, all the books in the world would not be sufficient to tell the story of who Jesus is and what He has done (John 21:25).

Because of the limits of the written word, the Bible tells us God took on human form so we could see Him as He truly is. Jesus declared, to see Him was to see the Father (John 14:9). It is only by looking at Jesus that we can actually understand the way God feels about man. Story after story, and with each encounter, Jesus shows us something of the nature of God. When He drove men from the Temple, we realize He has a passion against any who would stand in the way of people coming to Christ. When He touched the leper, we learn He loves the unlovable. When He arrived at the funeral for His friend, we learn He has compassion in our times of need. When He multiplied bread and fish, we see He will do whatever is necessary to meet our needs. Each turn of the page, teaches us something else of who God is. Once again, this is but a glimpse into the Eternal One; a shadow of His glory, or the edge of His garment.

Paul declared, by taking on human form, Jesus was in fact setting aside much of His glory. That is one of the reasons behind the writing of the Book of Revelation. It is there, where Jesus clothes Himself again in the garments of glory, and reveals what His human flesh had obscured. Much of His majesty and power had been cloaked in human skin, only to be shed at the resurrection and revealed in Revelation. However, even the Revelation is somewhat limited. It is not until we step out of time and into eternity, that we will see Him as He truly is. At that time, the filter of this life will be removed, and we will know Him as we have been known.

What a glorious day awaits the child of God! A day when we no longer look at God as if looking at an image through a dirty window pane. At that time, all our questions will be answered and we will begin a whole new relationship with Him; where for all of eternity, He expresses the riches of His grace in His acts of kindness.

Until that day, let’s be sure we get to know the edges of His ways.

Psalm 97:10
“You who love the Lord, hate evil! He preserves the souls of His saints; He delivers them out of the hand of the wicked.” 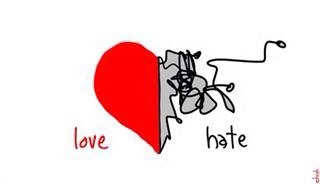 I find it striking that the Psalmist declares that hate is a necessary expression of true love. He explains that part of being in a healthy love relationship with Jesus is having a hatred for evil. Why is it necessary to hate evil? Why should we hate evil? I can think of at least three pretty strong reasons.

First, we should hate evil because of what evil does to creation. When sin entered the world, death entered and all of creation began to be in a state of decay. We observe this daily. People age and die, things deteriorate and break, everything goes from a state of useful to useless. Paul explains that creation itself even groans to be redeemed. If we could discern the voice of nature we would hear it crying out for redemption.

Second, we should hate evil because of what it does to us. Evil or sin separates man from God placing all humanity under its curse and penalty. Sin has devastated families, wreaked havoc on relationships, fueled racial prejudices, started wars, and will ultimately damn those who reject Christ to eternal separation from God. Even after we are redeemed, sin is like a cancer that eats away at the spiritual life of the believer. When we allow sin to reign in our mortal bodies, it creates distance between us and God, causing us to miss out on experiencing abundant life, for which he died. Instead of life, love, joy,  peace, we find ourselves living under the weight of guilt and fear, suffering the consequences of our personal failures.

Finally, we must hate evil because of what it has done to God. His holiness demands that sinners are separated from Him, but His love drives Him to restore our broken fellowship. The only currency valuable enough to pay the cost for the human soul is the blood of God. It was because of sin that the blood of God was shed. We have all felt the weight of individual sin. We know the guilt and pain that we have been under, as a result of one sinful action. On the cross, Jesus bore the weight of every sin that every man has or will ever commit. The darkness of that day aptly illustrate the severe suffering that Christ endured as He cried out, “My God why have You forsaken Me?” It seems to me, the proper response for the child of God is to hate evil. It has been my experience that we avoid what we hate. A true hatred of evil will cause us to avoid sin, rather than living as close to it as possible. Will you join me in praying that we would have a healthy hatred of sin, and avoid it at all costs?