Ephesians 3:20
“Now to Him who is able to do exceedingly abundantly above all that we ask or think, according to the power that works in us” 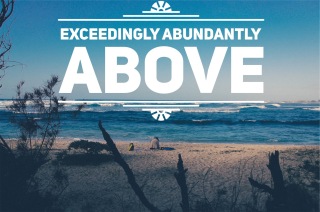 Prayer is the great privilege of the Christian. With it, we are given access to the throne of God. Every care, no matter how small, can be cast at His feet. Every mountain, no matter how large, can be removed through prayer. Prayer was a daily activity in the life of Christ. He rose early for prayer; stayed up late into the night praying. He prayed before making decisions, facing obstacles or simply to give thanks to the Father for what He had provided.

Prayer was an important part of the life of the Apostles. They were taught to pray, by Jesus. After His resurrection, they often gathered for prayer. Through prayer, they learned to wait on the promises of God, seek the mind of God, and receive strength from God.

Prayer is a common subject in the Epistles. Just as the Apostles were taught by Jesus to pray, and had seen the effectiveness of prayer in their lives and ministries, it was important they teach us to pray. Why then do we often neglect to pray? Is it possible we neglect praying because we are afraid that it may not work? Sometimes, when faced with obstacles, we try using our own strength, wisdom and resources. When that does not work, we seek the strength, wisdom and resources of others. It is only when those fail that, as a last resort, we begin to pray.

“Now to Him who is able to do exceedingly abundantly above all that we ask or think, according to the power that works in us”

Paul had a different view of prayer. He believed the power of God was sufficient to do all that he asked. No matter what obstacles Paul faced, he knew God was able. But his view of the ability of God did not stop there. He also believed God was able to do more than he asked. He describes the power of God as exceedingly, abundantly above whatever obstacle he was facing; and we know the apostle faced some pretty serious obstacles. He believed in a big God, and as a result, was not afraid to ask big things from God. He even prayed that we would be “filled with the fullness of God.”

That view of prayer comes from good theology and good practices. In other words, Paul knew who God was. He had read story after story of men and women facing obstacles much bigger than themselves. Rather than relying on their own resources, they sought God and found Him able. Paul did not stop with the stories of others. When faced with his own obstacles, he sought God, and as he prayed, he found that God was able. Prayer is something that is best learned by doing. Classes on prayer have their place, but nothing beats falling down before the Lord, crying out to Him, and seeing Him do exceedingly, abundantly above what we asked for.

Can you Imagine, you are given a key that gives you access to the vault of the world’s largest bank? Whenever you are faced with a financial crisis, all you have to do is take out the key, and access the vault. Can you also imagine the folly of not using the key because you are concerned that it might not work?