1 Kings 19:10
“So he said, ‘I have been very zealous for the Lord God of hosts; for the children of Israel have forsaken Your covenant, torn down Your altars, and killed Your prophets with the sword. I alone am left; and they seek to take my life.’” 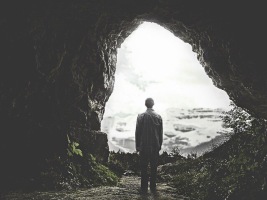 Elijah was a man devoted to God. Publicly and privately, he showed commitment and faithfulness to the Lord. His most recent experiences had led him to a face-to-face conflict with the one who most opposed the ways of God. After experiencing great personal victory, Elijah was plagued with a deep depression. He felt as though he could no longer continue serving the Lord, for the opposition was simply too great. Instead of surrounding himself with others who loved and served the Lord, Elijah isolated himself, and his depression grew deeper and darker. The farther he ran, the worse things became, until he found himself miles from home, cowering in a deserted cave, deep in the wilderness.

It was there, in his deepest darkness, that the Lord showed up. It was not a physical appearance Elijah saw, but the quiet voice of God which he heard. The Voice reminded him of a few foundational truths. First, God was not done. Just as Elijah had been used in the past, so would God continue to use him. He had work to do and that work involved raising up the leaders of tomorrow. Second, God reminded Elijah he was not alone. Although feeling isolated, and having a sense that no one understood or even cared about the things which concerned him, he was reminded there were thousands of others who also served the Lord.

Discouragement and depression are common emotions which plague those who faithfully serve the Lord. It is not unusual for those who love the Lord to be hit hard by their own personal failures or the failure of others. When those times hit, we need to avoid isolating ourselves, we need to get around the family of God, and allow the Lord to comfort and strengthen us.

If you are facing the dark side of emotions, take the time to reach out to a Christian friend for prayer, and counsel.

One thought on “Alone? ”